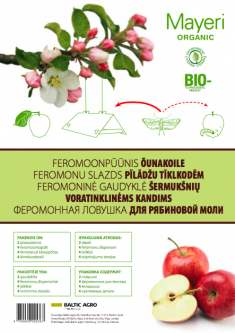 The adults of the apple fruit moth (Argyresthia conjugella), formerly also known as the rowan moth or apple/rowan moth, are small light-coloured moths with a slender body. The size of the moth varies from 10 to 15 mm. As a rule, bigger moths infest apple trees while smaller moths infest rowan trees. Their flight mainly takes place in twilight in warm and windless weather; during daytime, they remain unnoticed on tree trunks or branches.

After flight and mating, the female moth lays up to 40 eggs on apples, rowanberries or hawthorn berries. The larvae that hatch from the eggs after 10-14 days (depending on the weather) burrow into the fruit. Having fed there for about a month, they descend onto the ground on a thread and pupate in the upper layers of the soil, underneath fallen leaves or under the bark of tree trunks, which is also where the pupae overwinter.
These are images of an adult apple fruit moth in flight and lying still (the position in which they are usually found on the gluey base). The image on the right shows the damage caused by the apple fruit moth.

From time to time, apple orchards in Estonia face years in which the apple fruit moth (Argyresthia conjugella) is seen in large numbers, damaging the harvest and making it practically worthless. The damage is caused by larvae that dig narrow twisted passages inside the apple, reaching to the core. A single apple is usually damaged by several larvae (sometimes even up to 10-15), making the flesh hard and bitter – unfit for eating or for making apple juice.
The flight of the moths usually starts after the blooming of apple trees, often during the blooming of rowan trees, or even later, depending mainly on the average daily temperature. The flight in Estonia generally begins in the end of May or the beginning of June; massive flight is recorded in the end of June and in July. At times, the flight even continues in August, thus lasting over 60 days.

By using 2-3 apple fruit moth pheromone traps, you will be able to identify the presence of this pest in your garden and, based on the insects caught in the traps, estimate their numbers in order to decide whether insecticide spraying is required. By using more traps (one for every tree), you will be able to reduce the numbers of this pest in your garden by catching them (“trapping out”).

The edges at the bottom of the trap are folded upwards.
The pair of gluey bases is pulled open and one gluey base is placed on the bottom, gluey side upwards.
The rubber pheromone capsule (dispenser) is placed in the centre of the gluey base.
Fasteners are pushed through the openings and used to fasten the trap to a branch.
The trap is hung as horizontally as possible on the southern or western outer branch of the apple tree in order to cover it from direct sunlight.
When using pheromone traps in order to monitor the apple fruit moth, the traps are hung at a height of approximately 2 metres in order to make it possible to inspect them once a week.
For monitoring purposes, the trap is opened from the side, the insects are removed from the gluey base with a spatula or the edge of a knife, and the number of apple fruit moths in the trap is registered.

If it becomes apparent in the course of the inspection that the gluey base is dusty or filled with insects and refuse, it must be replaced.
If there are numerous pests in your garden – if the traps catch an average of 10 or more adult apple fruit moths per trap in a week – it is recommended to conduct insecticide spraying and continue monitoring the numbers of the apple fruit moth in order to decide whether spraying should be repeated.
It is recommended not to conduct insecticide spraying if the number of moths caught is below the spraying criterion. This will help you preserve nature and avoid needless expenses on insecticide.
We recommend hanging more traps in the garden (trapping out) in order to avoid any further increase in the numbers of the pest.
Trapping out adult apple fruit moths with pheromone traps is well suited for pest control in your own garden where it is not recommended to use insecticides at all, or if required, insecticides are used as little as possible.

For the purpose of pest control, a trap must be hung on every tree or one for every two saplings, and the traps must definitely be hung higher – at a height of 2-3 metres – as adult apple fruit moths mainly fly in the upper third of the treetop.

After 3-4 weeks, the gluey bases of the traps have gathered plenty of dust, are covered with insects and refuse, and should certainly be replaced. If the flight of the apple fruit moth lasts for a longer period (mainly depending on the weather), both the gluey base and the dispenser should be replaced in the second half of July.
If the spare capsule is not required, it can be stored in a cool place in sealed packaging and used next spring.

If the weather has not excessively damaged the casing of the trap, it may be used again next year, but only for the same insect species.
A noticeable decrease in the damage caused by the apple fruit moth is generally achieved as the result of pest control over 2-3 years.
In order to avoid a new increase in the numbers of the pest in the garden, you should continue using the traps.