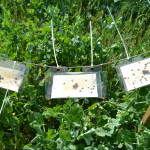 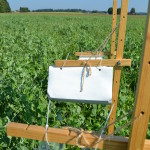 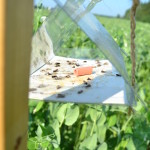 In summer of 2012 a research of jumping bean moth pheromone traps was carried out in co-operation with Plant Breeding Institute of Jõgeva. Tests took place on two different green pea fields. Traps were laced on first field on 18th of June and on second field on 20th of June when the green pea has started to blossom.

We recommend to use pheromone traps for determine of right flying time. When the trap collects 5-10 jumping bean moths during twenty-four-hours, it is the sign of rather heavy flying period and need for spraying. Best time for spraying is when as much as possible of moths have hatched from eggs and are not yet entering the pod. Right spraying time can essentially decrease costs on plant control means..

Traps were placed in 5 different small gardens in order to identify how much jumping bean moths can be found in home gardens.

Most of jumping bean moth was found in Põlva County tests. 26 and 20 moths accordingly. Green peas were grown on these lands previous years and therefore it is possible to assume that the jumping bean moth has survived the winter, gone through a development cycle and came out during blossoming of the peas and had very good conditions.

We strongly recommend pheromone traps in small gardens where people try to avoid pests control substances. Pheromones are harmless for people and they have impact only on pests, which are attracted into the traps with a smell and female moths will not mate. The number of damaged pea pods.